This is a costly and inefficient method in comparison to LIFE DIME. The usual method for treating spent pickling baths is neutralisation with alkaline substances to promote the precipitation of metal hydroxides, mainly Fe and Zn.

The main concern related to the treatment of this liquid waste is the metals present in the form of soluble salts that are generated during the metal surface finishing treatment, such as degreasing, pickling, alloy plating baths or varnishing.

It has highly corrosive properties that pose a hazard for the environment and its effects on the ecosystems into which it is disposed may be extremely serious:

The toxic nature of certain additives used in metal surfacing treatment solutions, such as corrosion inhibitors and surfactants, have harmful effects on the environment.

The main environmental problems derived from metal surface finishing treatments are related to energy, water and raw material consumption, surface and groundwater discharges, solid waste and environmental conditions once the activities have ceased.

The main concerns related to water pollution are the metals discharged in the form of soluble salts as they generate various liquid effluents during metal surface treatment, acid pickling, alloy plating baths or varnishing processes.

Apart from being costly for metal industries in financial terms, neutralisation is environmentally inefficient due to the high salinity of the effluent after treatment and the generation of large quantities of sludge that must be treated again by neutralising before being sent to the landfill. Furthermore, this procedure does not permit the recovery of any raw materials or by-products.

Generation of waste in pickling processes

Pickling (chemical descaling) is the most common chemical procedure to eliminate impurities such as stains, inorganic contamination, oxide, surface oxide and other impurities from metal surfaces. Hydrochloric acid (HCl) is the pickling acid use to complete the chemical reaction.

The acid becomes more diluted and less effective with each use, and when the HCl concentration is insufficient, it cannot be used any longer and must be discarded. When the acid has become too diluted to be effective, the bath must be replaced by a new one with a fresh load of HCl.

The corrosive nature of these spent baths is due to the presence of acid and residual metals and for this reason, they are considered to be highly toxic and hazardous liquid waste (pickling acids): LER 11 01 05 *).

Pickling is widely used for deincrustation and cleaning in certain steel manufacturing processes and is also a crucial step in the galvanising process. Galvanising is a process for protecting steel, iron or aluminium from corrosion in which the metal is coated with zinc to prevent it from rusting.

The galvanising process consists of dipping the clean steel, iron or aluminium components (after a pickling process) in melted zinc with a temperature of around 450 °C.

A series of layers of zinc and iron alloys are formed by means of a metallurgical reaction between iron and zinc, creating a strong bond between the steel and the coating. This technique requires large quantities of water during the different phases, thus generating large volumes of waste water laden with suspended solids and metals that are hazardous to health and to the environment (70 kg of spent baths are generated for every ton of galvanised components).

So, this type of spent bath is also considered toxic and hazardous because of the zinc that is added to the used pickling mixture.

A LIFE DIME plant integrates 3 technologies that have been successfully tested on a large and small scale: extraction, crystallisation and membrane distillation

An organic agent is used to separate Zn in the extraction process.

Fe is recovered through crystallisation, which consists of separating Fe from the liquid solution that contains it, transferring it to the solid phase in the form of crystals.

Membrane distillation is a thermal separation process in which only the vapour molecules are transferred through a microporous, hydrophobic membrane (recovery of HCl).

An organic phase is used to eliminate Zn from the spent bath.

The aqueous phase will contain a high concentration of ZnCl2 which can be reused in full in the galvanising industry (fluxing process).

However, this solution must be purged occasionally, generating a small quantity of sludge which must be collected by an authorised waste manager for recycling through distillation.

The recycled solvent is reused with the LIFE DIME process.

A crystallisation process generates FeSO4 salts as they are separated from the liquid fraction by means of a special vacuum evaporation process.

These salts are separated from the liquid phase with micron-rated polypropylene filter bags.

FeSO4 is very useful in sectors such as horticulture or viticulture and it can thus be sold as a fertiliser.

A membrane distillation process produces a concentrate formed by water, H2SO4 and FeSO4, which can be reused by the LIFE DIME solution in its crystallisation process.

Nonetheless, the concentrate must be purged regularly as it will accumulate undesirable compounds (such as metal salts) and the H2SO4 will become more and more diluted.

The sludge generated after purging the concentrate must be collected by an authorised waste manager. 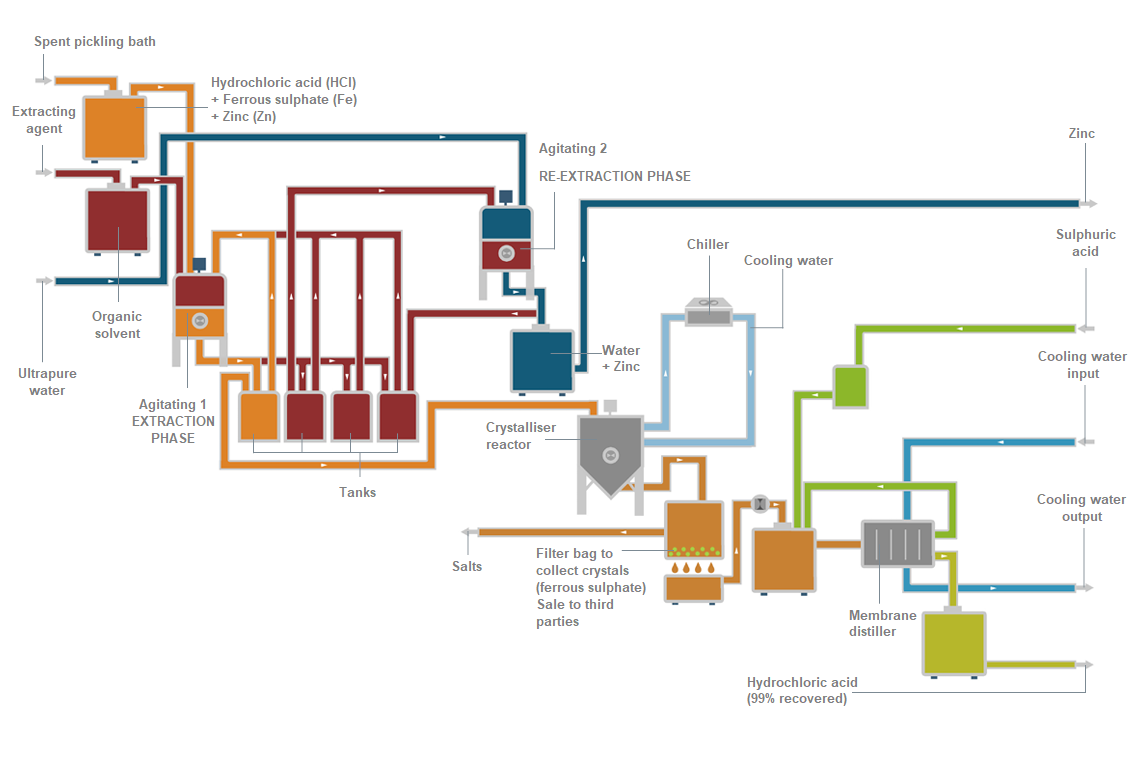 Video of the process

A LIFE DIME plant permits the regeneration of 99 % of the HCl (free and combined) and 99 % of the metal salts (mainly Fe and Zn) contained in the spent baths without producing any more liquid waste (ZLD).

However, purging must be carried out occasionally to guarantee the proper operation of the overall process. The amount of waste derived from the purging operations is 1 % of the total flow in the form of salts and strange solvents.

The integration of a crystallisation system with the membrane technology for the distillation of HCl, a world first, brings the following benefits to the overall treatment process:

LIFEDIME is a solution that recovers metals and hydrochloric acid from spent pickling baths.

LIFE DIME is co-financed by the LIFE program of the European Union. (Grant Agreement No. LIFE16 ENV/ES/00041). This website expresses only the opinion of the author hence the agency is not responsible for any possible use of the information herein contained.